As COVID-19 continues its ravage, Nigeria still contends with managing its many crises of violent killings. Our tracking system shows that at least two hundred and seventy-four (274) persons lost their lives to violent killings across the country. Particularly disturbing was the high-handedness of security personnel enforcing the COVID-19 lock-down orders. These inordinately violent actions alone led to the deaths of at least 24 persons. Other recorded attacks included banditry/pillage attacks, continued terrorism, abductions, and isolated attacks.
Below are highlights of incidents that occurred in the April 2020.

Banditry/Pillages
At least 160 deaths were attributable to pillage/banditry in April 2020. Witnesses confirmed that because of the lock-downs, bandits operated freely, attacking in their hundreds, shooting sporadically, razing down houses and killing residents as they pillaged.
In the pillage of three local government areas in Katsina State – Dutsinma, Danmusa and Safana , at least 47 persons were killed. Normalcy was not restored for over 6 hours until a joint team of security personnel was deployed to the scene. Similarly, no fewer than 22 persons lost their lives bandit attacks in Gangara village of Sabin Birni Local Government of Sokoto State.
In another incident, hours after gunmen killed three persons in Ancha community in Bassa Local Government Area of Plateau State, seven persons were hacked to death in the neighboring Hukke village in the same local government area.

Extrajudicial Killings
Extrajudicial killings perpetrated by security agents have remained a constant decimal in Nigeria. Directly related to their enforcement duties related to the coronavirus pandemic lockdowns, security agents killed 24 persons while carrying out their duties. For instance, a man identified as Joseph Pessu was killed during a clash between restive youths and soldiers enforcing the stay-at-home order in Delta State. In Kaduna State, 2 incidents of extrajudicial killings which involved officers of the Nigerian Police Force and correctional service officers were reported. These incidents occasioned the deaths of 11 persons.  There has been no further news about the apprehension of the officers responsible for these deaths.

Cult Gangs
In the wake of the lockdown order, cult-gangs presence took a dramatic dimension as armed gangs identified as the one million boys, numbering at least 200 invaded neighbourhoods such as: Alakuko, Ijaiye, Meiran, Iju-Ishaga, Fagbenro Street, and Kola, all in the suburbs of Lagos state.
Residents subdued into hiding in their homes in fear, while others mobilized and engaged the robbers in a confrontation, to repel them from further carrying out the heinous act. The Lagos state police command also increased personnel deployment to the affected areas and gave out emergency numbers to call in case of attacks.

The Insecurity of Security Officers
The attacks on security agents continues to be a worrisome trend and as with previous months, they have recorded double digit numbers of fatalities. Of the 274 deaths recorded in the month of April 2020, at least 13 of them were of security agents.

The spiraling spate of the security in Nigeria has continuously caused citizens to become reactive rather than proactive. There has not been any convincing response to these violent conflicts by the security forces as news of killings continue to emanate.
One of the primary objectives of government is to protect the lives and properties of its citizens, however, violent killings abound and this questions the capacity of the Nigerian state to adequately secure the lives and properties of its citizens.
One begins to wonder if the state, with its primary responsibility has become complacent.
It is paramount that we document these deaths, to give analyzable data to discuss ways to prevent re-occurrence and enforce tighter security laws to manage and resolve the insecurity situation. 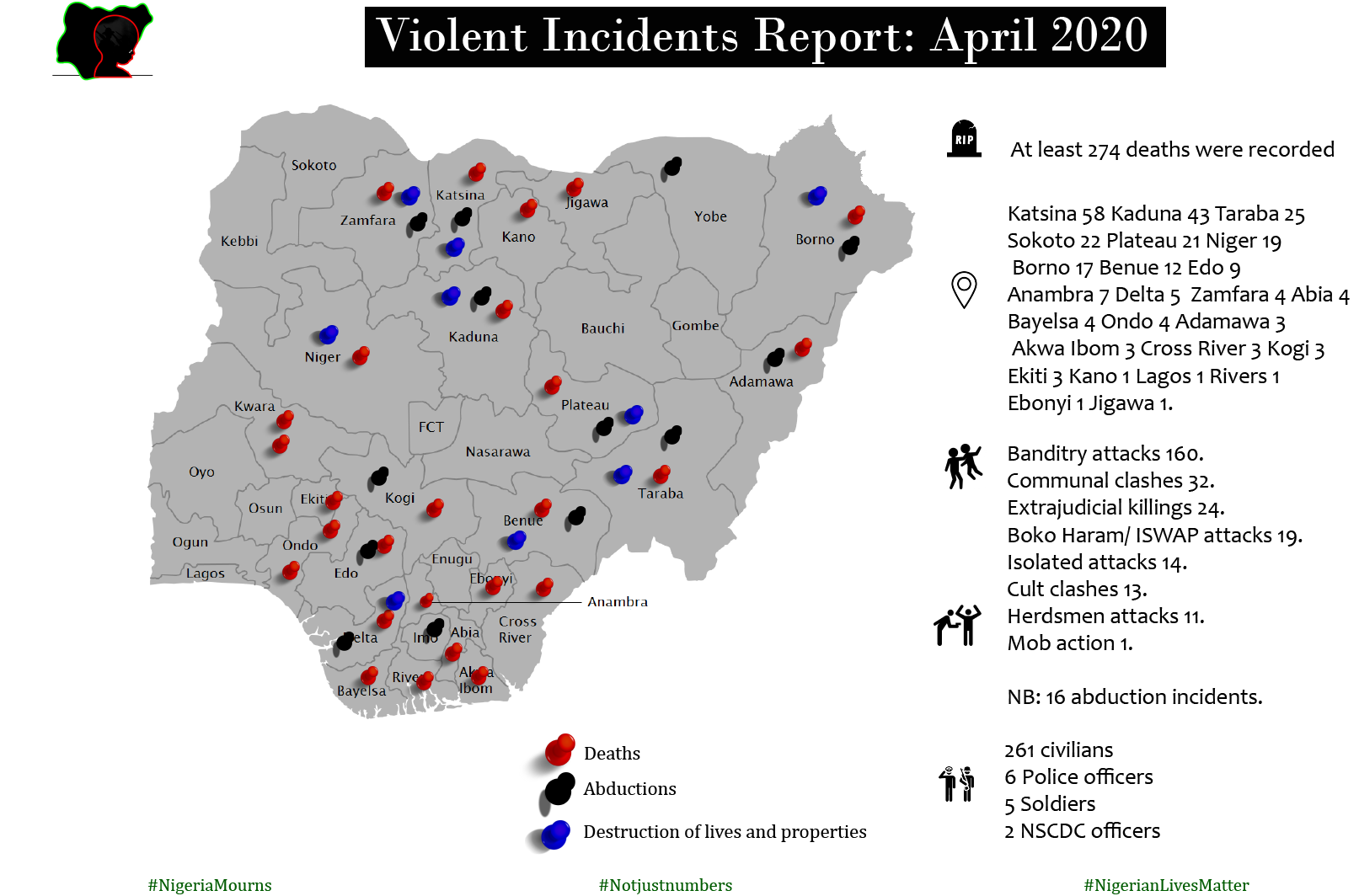 https://twitter.com/rbarwanda/status/1262736771617640450 Five humanoid robots have been delivered to Rwanda to assist in both patient screening and delivery of foods and...
Read more
0

One of the world's most wanted fugitives has been captured. French authorities arrested Félicien Kabuga, an alleged leader and...
Read more
0

Stakeholders have called on the federal government to ensure openness, transparency and wide-range inclusion in the process leading to...
Read more
0

Tribute: Dele Momodu, My Publisher, At 60 – By Ehi Braimah

Writing a special tribute in honour of Bashorun Dele Momodu as he clocks 60 years can fill a book...
Read more
0

The the founder of the first ever monthly digital beauty contest in Nigeria, Devaan Mom has said that the...
Read more

Stakeholders have called on the federal government to ensure...
Read more
- Advertisement -

One of the world's most wanted fugitives has been...
0
Read more
Advocacy

Stakeholders have called on the federal government to ensure...
0
Read more
News Across

Tribute: Dele Momodu, My Publisher, At 60 – By Ehi Braimah

#VideoNewsReport: Nigerian Workers  at the Lagos State Secretariat Reacting to...

CBN orders workers in all commercial banks to declare assets